In January 2022, Benin introduced the MenAfriVac vaccine into its regular vaccination schedule. The MenAfriVac provides protection against Type A meningitis. This campaign was organised to reach the remaining cohort of unvaccinated children, who had not been reached since the last preventive campaign in Benin in 2012. The campaign targeted five high-risk departments: Borgou, Alibori, Atacora, Donga and Collines.

The Secretary General of the Ministry of Health, Dr Ali Imorou Bah Chabi, was joined by representatives from government, local authorities and partners at a national launch to mark the campaign in Parakou (Borgou) in March 2022. 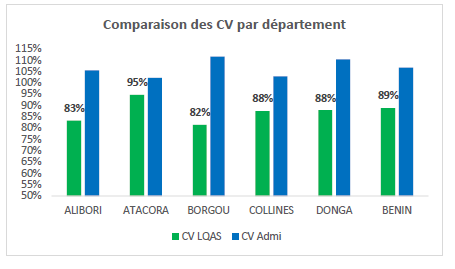 The Lot Quality Assurance Sampling (LQAS) conducted, led to the catch-up vaccination of children in 15 out of 33 municipalities and a final vaccination coverage of 89%. Concerning adverse events following immunization, 1,744 were notifications were made , of which 39 serious ones were investigated.