Notes from the field: Delivering MenAfriVac using the CTC approach

by Simona Zipursky, PATH; Mamoudou Harouna Djingarey, WHO/AFRO; Olivier Ronveaux, WHO/AFRO; Sylvestre Tiendrebeogo, Consultant In November 2012, the first immunization campaign to use a controlled temperature chain (CTC) took place in Banikoara in northern Benin. MenAfriVac is a meningitis A vaccine developed by the Serum Institute of India with support from PATH and the World Health Organization (WHO) through the Meningitis Vaccine Project. It is the first vaccine to be licensed by regulatory authorities and authorized by WHO for use at ambient temperatures of up to 40°C for up to four days. The campaign in Banikoara provided us with a unique opportunity to get a better understanding of how the CTC approach works in the field. The Beninese Ministry of Health was able to more clearly assess opportunities and challenges with the approach and WHO was able to identify ways to improve guidance and training materials developed through the Immunization Practices Advisory Committee. Everyone involved was able to see how the CTC works in field conditions and what adjustments to campaign procedures need to be made before the approach can be applied in other settings. Overall, the effort was a resounding success. Although the results from the monitoring study are still being analyzed, no serious adverse events following immunization were recorded during the campaign. We were also reassured that there was no increase in vaccine wastage. With MenAfriVac only prequalified for use at ambient temperatures up to 40°C, we had feared that using the CTC approach in Benin’s often searing midday heat might lead to unacceptably high levels of vaccine wastage. But over the course of the campaign, closed vial wastage (the number of vaccine vials thrown away without being opened) accounted for just 10 out of 15,500 vials, and some of those were due to vial breakage. We found that simple solutions proved extremely effective. Our system to keep track of how long vials had been out of the cold chain for is a good example. At the end of each day, any unused vials that had been kept in a CTC for a day were marked with a single line. At the beginning of the following day, these marked vials were used first. If by chance these marked vials were not used again, at the end of each subsequent day, they were marked with an additional line (up to three). This system was easy for health care workers and supervisors to implement and ensured that prequalification conditions were met. Another challenge was how to know if the 40°C temperature threshold had been exceeded. The ambient temperature reached 39°C on many days, and we were worried that vaccines would be exposed to even higher temperatures during transportation or by direct exposure to the sun. To ensure this did not happen, we used a peak threshold indicator—a simple laminated card with a temperature-sensitive sticker that changes color when the threshold (in this case 40°C) is reached. One indicator was placed in each vaccine carrier. Vaccinators were instructed to check the indicator each time they took a vial out of the vaccine carrier and contact their supervisor if they noticed the sticker had changed color. In this way, vials found to have been exposed to temperatures above 40°C would be discarded. After extensive use, the indicators were deemed easy to read and use by health care workers, and supervisors’ reports validated their correct use in the field. Together with the vaccine vial monitors (VVMs) on the vaccine’s label, which monitor a vaccine’s cumulative exposure to heat, the peak threshold indicator gave health care workers confidence that the vaccines kept in a CTC were still safe and effective to use. 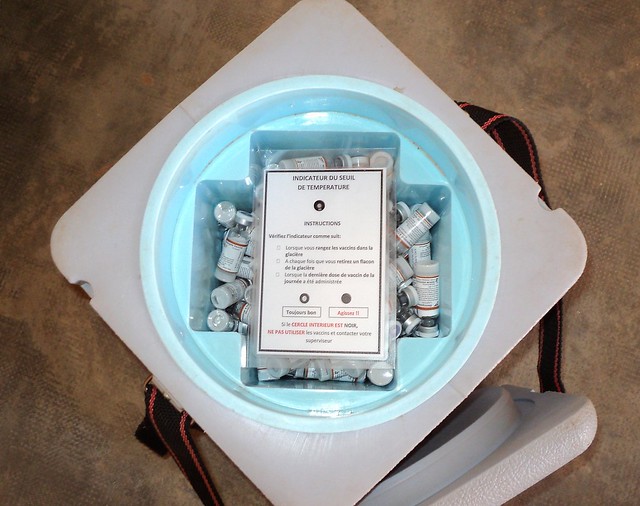 A peak threshold indicator placed in a vaccine carrier. Photo: WHO/Olivier Ronveaux Aside from these few simple modifications, the pilot in Banikoara used existing equipment, including the standard grey vaccine carriers employed in other campaigns. This allowed us to protect vaccines from high temperatures and direct sunlight. Just as importantly, we found that these “grey boxes” were so well known within the community as symbols of immunization that replacing them with something else would have been a social mobilization challenge. While many anticipated challenges were ultimately easy to address, new challenges emerged. The peak threshold indicator, designed to irreversibly change color when the threshold was reached, turned out to be very sensitive when exposed to direct sunlight. Even with an ambient temperature of just 28°C, if the indicator was placed in in the path of the sun, it quickly changed color. As a result, we adjusted our guidance to health care workers, suggesting they read the indicator in the vaccine carrier rather than removing it from the vaccine carrier and placing it on a table to read. With this additional guidance, the problem was solved. Concern that health care workers would be confused by having more than one set of rules to follow on immunization campaigns proved unfounded. It had been feared that using the CTC approach for one campaign and then returning to the regular cold chain for another might lead to inappropriate cold chain procedures being followed. But in the polio vaccination campaign conducted in Banikoara just a week after the MenAfriVac campaign, the cold chain was again used properly. At the end of the MenAfriVac CTC campaign, vaccinators and supervisors were asked what they thought of the approach. After weighing the benefits, the challenges, the learning curve, and the limitations, every person asked said they preferred conducting campaigns “the CTC way.” Such high acceptance in Benin was not necessarily expected, as the cold chain functions relatively well and the roads are generally manageable. There is much work to do before the CTC can be applied elsewhere. Not just in putting what we learned from Benin into action, but also in taking what we heard from Benin—the need for more vaccines to be licensed for CTC, the call for more flexibility—and work with manufacturers and regulators to make that happen. The work is moving forward, and the results from Benin suggest a positive future for CTC. This article is accompanied by a slideshow of photographs taken during the MenAfriVac CTC campaign in Banikoara. You can view the photo set on Flickr.
Diseases
Tags
Country
New Technical Briefs on Strengthening Malaria Supp...
Sharing the experience of 'Perjaje Template'
Responses (0)